We Are Thankful For Our Unparalleled Print History 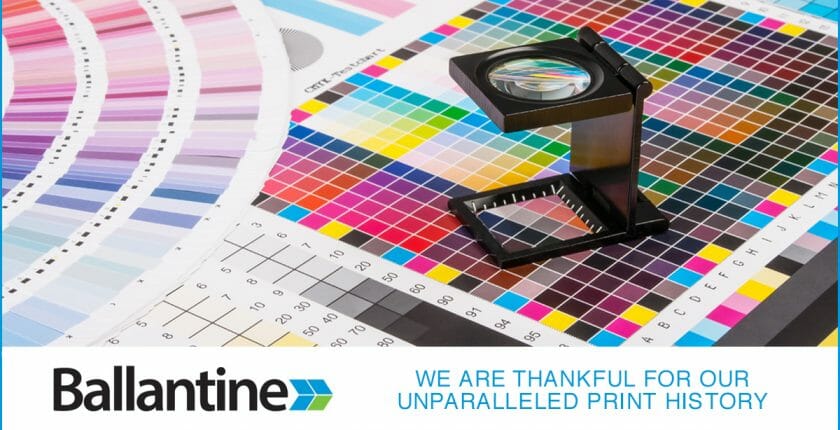 While digital marketing tends to steal the spotlight with its up-and-coming trends, print marketing has quietly taken the role of consistent, and often necessary, performer.

Ballantine continues to appreciate print marketing and the medium that played a crucial role in the company’s beginnings. Our family-owned and operated business started in 1966 when print marketing was the main method of marketing.

Print marketing evolved in a way that continues to make it a necessary part of marketing strategies, and it’s interesting to learn how it’s been able to grow and adapt.

In order to understand how print marketing has evolved, and Ballantine along with it, a knowledge of the history of marketing is helpful.The whole concept of “print” began in 1450, when Johannes Gutenberg invented the movable printing press. This made hard-copy communication easier and quicker than ever before.

In the 1730s, magazines were introduced. Skip ahead to 1839, and posters began popping up and in 1867, billboards were constructed along roads. It wasn’t until the 1900s that other mediums started to take a branch out into the marketing world. Radio ads, television commercials, and telemarketing became new strategies that created a shift in focus in 1972. This was about the time the “is print dead?” question made its debut, but print was far from dead thanks to computers.

The Evolution of Print Marketing

Computers became more prominent in the 1980s, and with it came the ease of desktop publishing tools. Print advertising was able to increase and improve thanks to these tools, but it wouldn’t be long before it needed to evolve again.

Blogging, online advertising, social media and mobile marketing followed, quickly trumping television. The reasoning for this is simple: today, more people spend more time on the Internet than they do watching television, and almost everyone has a smartphone.

Where Does That Leave Print?

With this digital era comes a lot of data. Companies can learn more about their target audience than they ever could before. This created a niche for targeted, on-demand print material.

While this strategy is an adjustment from the standard of mass mailing to mass numbers in hope of getting enough responses to recoup costs, it’s a strategy that works. The people receiving the material are significantly more likely to act on it. According to research, close to 80% of consumers will act immediately on a direct mail piece, compared to only about 45% with email. As direct mail becomes less common, consumers are more interested in what they are receiving. It can also help with brand awareness and improve reach across multiple generations.

Print materials will always engage more senses as well. Besides the visual, consumers can hold it and smell it. This can impact brand recognition.

Is there a store out there that doesn’t have signage or advertisements of some sort? Any business would look plain and unprepared if there wasn’t some sort of visual print marketing. As you can see in-store display print advertising remains necessary.

Ballentine can work with you to figure out both your print and digital marketing needs and create a strategy that optimizes both of them to ensure the best results for your business contact us today!