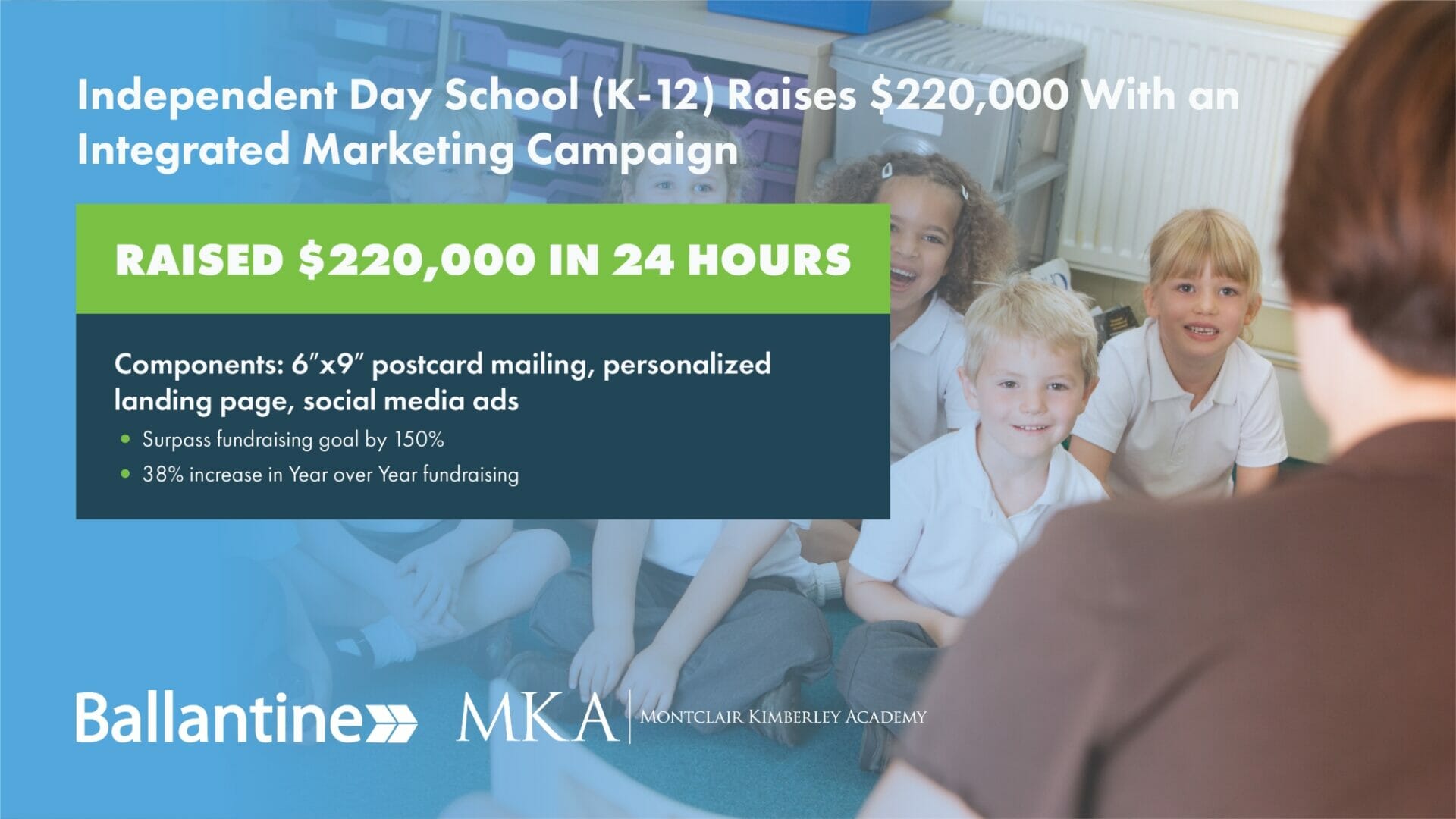 The goal for campaign development was to compress the fundraising effort into a single day, with a combination of print, email, and social media touch points leading up to the fundraising event.

Ballantine and MKA had worked together in the past to develop print materials for admissions and fundraising efforts.  These materials had included brochures, postcards, and other material.

MKA approached Ballantine to develop a new fundraising campaign in order to improve on the performance of earlier efforts.  In the past, MKA had used extended fundraising campaigns over the course of the year to raise money for the school.  However, this year they wanted to change up their approach and provide an experience that was innovative and more engaging to alumni.

Ballantine had developed a successful single day fundraising campaign for another educational institution that has evolved into an annual event.  Ballantine took the best practices from this experience and collaborated with MKA to create a fundraising event that matched their school and their needs.

The result was “MKA Day”, a one-day fundraising event that was held on October 17, 2014. The event had a tag line of “Participate, Donate, Celebrate”, embracing the efforts of donors and volunteers as they raised money for their school.

The promotion leading up to MKA day included a combination of media to engage alumni through multiple touch points. Ballantine provided all of the creative design for the email blasts and postcard mailings, print and mailing services for the postcards, and web development for the MKA Day website.  MKA provided social media support leading up to and on the day of the fundraiser. MKA also provided copy for the print and web content. The process of engaging alumni started about four weeks before MKA day, and several methods were used, including:

The goals of the pre-fundraiser activities were to make alumni aware of MKA Day, to engage them as the day approached, and to remind them through multiple touch points to participate on the day of the event.

On MKA Day itself, MKA staff and volunteers used emails, text messages, and phone calls to contact alumni to encourage them to participate.  Some of the telephone calls were handled by current MKA students, adding a personal touch to the contact with alumni and providing students with a way to give back to the school. Several friendly rivalries between classes grew out of social media discussions, encouraging one class to “out donate” another. Donors could track the donations via live updates on the MKA Day website.

The focused strategy of a single day of fundraising combined with targeted mailings, email blasts, PURLS, and social media resulted in a significant boost in donations as well as increased alumni engagement .

According to Gretchen Berra, Associate Director of Alumni Relations and Communications:

“We would highly recommend Ballantine to any institution looking to develop a comprehensive and robust marketing strategy to achieve their objectives. Ballantine understood exactly what we wanted and effectively met our every need; It was as if they were part of our team. We are thrilled with our results and can’t wait to work with them again.”

READY TO GET STARTED WITH BALLANTINE?
LET'S DO IT